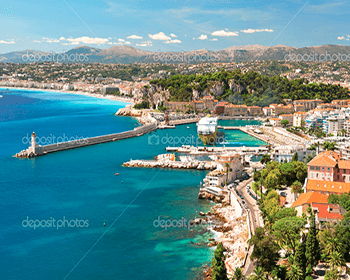 Few places in the world conjure up more glitz and glamour than the French Riviera. This sun-soaked Mediterranean coastline of southeast France is synonymous with uber-wealthy visitors, multimillion dollar superyachts and beautiful film star celebrities. Visiting the French Riviera is every bit as glamorous as it sounds, but this beautiful area is not too snobbish to welcome ordinary mortals who stroll the Promenade des Anglais in Nice, explore the chic boutiques of San Tropez, and ogle, camera in hand, at the belle-époque architecture of Cannes.
The French Riviera is known by locals as the Côte d’Azur, referring to the clear azure waters of the Mediterranean Sea. It perfectly complements the gleaming white hulls of the flotilla of anchored mega-yachts that host private parties for A-list celebs in this exclusive summer playground.
Beyond these glitzy cities and immaculate marinas you’ll find pebbly beaches and sandy coves for sunbathing, and shady plazas for lingering lazily over a café au lait. A scenic drive inland will reveal centuries-old villages and equally ancient olive groves tended by sun-wrinkled locals, hoe in hand. While pretty boutiques in Nice may lure you with designer fragrances, you shouldn’t miss the chance to visit Grasse, where fragrant flower fields that feed the perfume factories offer a different perspective on this beautiful area.

Background Info about the French Riviera

The French Riviera stretches for over 120 miles along the coast of Provence, from the French-Italian border in the east to Toulon in the west. This exclusive area of pretty towns and coastal scenery in southeast France includes the micro-state of Monaco and the upscale coastal cities of Villefranche-sur-Mer, Nice, Antibes, Cannes, Saint Raphael, Fréjus, Saint-Tropez, Le Lavandou and Hyères. The most upscale and scenic area of the French Riviera is east of Nice where the Alps meet the Mediterranean providing a stunning backdrop to Monte Carlo.
Although today the Côte d’Azur is a glamourous destination, just 250 years ago it was impoverished region of olive groves and fishing villages. It was developed as a fashionable health haven for wealthy British aristocracy and European royalty who built elegant holiday villas during the late 18th century. Nice was actually part of Italy until the 1859 Italian War of Independence and the coastal railway suddenly opened up the French Riviera to well-heeled sun-seekers. At that time gambling was illegal, so the Prince of Monaco constructed a casino at Monte Carlo, which became a further attraction to this burgeoning resort.

Highlights of the French Riviera

The beauty of visiting the French Riviera is that the whole coastline is easily accessible wherever you choose to stay as your base. Here are some of the main destinations and what each one has to offer.
Monte Carlo
Surrounded by French territory, Monaco is an independent principality ruled since the 13th century by the 13th century. Its main and only city is Monte Carlo, famous for its opulent casino which is well worth a visit if only to admire the ostentatious décor. This densely populated tax haven has an abundance of luxury shops and designer brands and is a great place for window shopping.
Nice
Nice is the sixth largest city in France with a long seafront promenade bordering the pebbly beach. Historic quarters, grand architecture, the unmistakable Russian Orthodox Basilica and a famous flower market can all be enjoyed on a stroll. It is well endowed with shops, hotels, affordable restaurants and nightlife. Interesting art museums including the Chagall Museum, the Matisse Museum, the Musée des Beaux Arts and the MAMAC Modern Art Museum offer a taste of European culture. You’ll find wonderful views from the park at Castle Hill and waterfront dining around the Old Port quays.
Cannes
Cannes is best known for its annual Film Festival which rivals the Hollywood Oscars as one of the main events on filmmakers’ calendars. By day, explore the cobbled streets of Le Suquet with its beautiful architecture, or sit at a side table and people-watch. After dark, Cannes has a lively nightlife with bars, restaurants and casinos maintaining an air of exclusivity.
Saint-Tropez
Brought to fame by actress Brigitte Bardot, whose statue graces the waterfront, Saint Tropez is an old Mediterranean seaport on the sheltered bay. It’s historic centre, chic shops, authentic cafés, luxury hotels, spas and restaurants continue to attract jet-setters. Escape the crowds with a boat trip from nearby Le Lavandau to the offshore island of Port Cros, France’s only maritime national park.

Along with these major French Riviera attractions, plan to visit the perched villages of Èze and Gourdon, tour the perfumeries of Grasse and leave time to visit the art galleries of well-known artists from Picasso to Matisse. Shop in Nice, dine in St Tropez, roll the dice in Monte Carlo and drive the scenic coastline in both directions to appreciate the natural beauty. Unless you’re an avid autograph collector, avoid the Cannes Film Festival in mid-May, which raises the price of almost everything!

Enjoy a warm weather and pleasantly warm evenings from September through October.

“It is at a time like this, when crisis threatens the stomach, that the French display the most sympathetic side of their nature. Tell them stories of physical injury or financial ruin and they will either laugh or commiserate politely. But tell them you are facing gastronomic hardship, and they will move heaven and earth and even restaurant tables to help you.”
― Peter Mayle, A Year in Provence

In a few weeks from now, we will have the pleasure to introduce and present to you our new website Francparler Tours. This platform aim to be the tourists preferred destination to book their day trips and attractions when visiting Paris and France. We also offer conciergerie services.